As a background actor, you never know what crazy role may be your next role.  I recently worked background on the critically-acclaimed TV show called The Knick.  Loosely based on the real Knickerbocker Hospital, the show centers on the doctors who dealt with the high mortality rate that was common during the early 1900s.  The show, made exclusively for Cinemax, shows viscerally-disturbing scenes of admitted accident victims and disease-ridden patients and how doctors tried to use the medical technology at the time to save them or at least prolong their lives for a few more days.  I had the pleasure of playing one of those victims; an Irish construction worker who was caught in an explosion while building New York City’s first subway line.  I was among a dozen other guys playing the same parts.  We had to arrive on set at 6:00AM to get special-effects makeup applied to our faces and bodies to play the part.  First, I put on my costume, which was authentic working-class clothing from the early 1900s.  Here is a pic of my buddy Mark Vogt and I before my face became transformed: 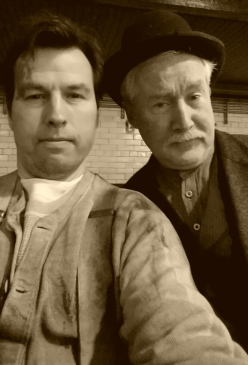 The make-up people started with specially made ‘tattoos’ that were to become our scars.  The tattoos were skin-colored and were textured for realism.

For the next step, the fx make-up artists used fine-point paint brushes to paint our scars and faces with various shades of red to indicate freshly-oozing blood.  The artists worked hard to make sure the blood dripping down our faces looked random and natural.  Our characters were involved in an explosion after all. 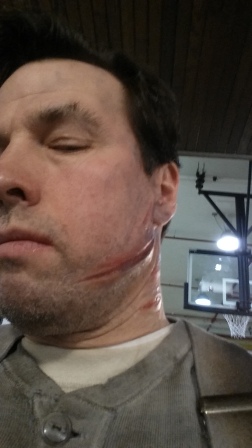 After the artists completed the blood portion of our makeup, they used a small fabric bag filled with black rubber dust.  This bag was dabbed all over my face, neck and hands to make all of my exposed skin parts appear dirty.  Then fake ‘dirt’ was added to my hair, hands, and in between my fingernails.  And by the way, the rubber dust was made from ground up recycled tires. 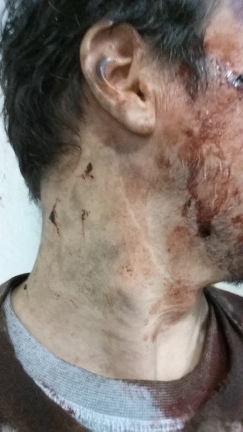 After each of us went through the above process, we were all asked to step on a big plastic tarp to be ‘treated’ by two female make-up artists holding big paintbrushes and small paint cans.  The women dipped their brushes in the cans of red liquid made out of corn syrup, then the top portion of our very old 20th Century workmen outfits were liberally doused with tons of this ‘blood’.  Afterwards, we were checked out by a head makeup person for last looks.  Then it was showtime!

We entered the set of the hospital and were placed in our positions by the assistant director.  Some were placed on stretchers and some were leaning against walls.  Another actor and I were told to sit on a blood-soaked bench for the scene and were given the direction once the camera starting rolling to moan in agony while others were told to cough.  Director Steven Soderbergh was filming the scene with a hand-held camera while his assistant pulled him on a dolly through all the suffering that was unfolding as the camera rolled by.  Starting with a close-up of a nurse tossing a blood-soaked rag into a basin, Soderbergh and his camera passed by me within inches as it panned by the various Irishmen dripping blood and writhing in pain and suffering.  One guy even had bones protruding from his lower arm.  It seemed like Soderbergh’s goal was to get embedded in all the turmoil for a very nauseating, but dramatic effect.

We all had a bloody good time and no Irishmen were hurt during the filming of this scene.  If you ever want to catch this scene on TV, it will appear in Episode 5 of Season 2.

Note: The above photo reflects Day 2 of a two-day shoot.  On Day 1, we were all made-up by the fx artists, but were not used after waiting in holding for 12 hours.  Below is how I looked on the first day on set.  If you look closely, you can see pieces of wood stuck in my neck.  The artists glued those into our necks to really bring the impact of the explosion home to viewers.

3 thoughts on “A Bloody Good Time”