I recently took my 13-year-old to an indoor rope-climbing place called Palisades Climb.  We planned on checking it out together to see if it would be a good place to celebrate her birthday party next month.  I was getting tired of having my kid’s birthdays at the typical party places and I thought that an indoor climbing park would be fun for the kids.  When we got there, the place was huge; it’s touted as being the “World’s tallest indoor ropes course”.  At 85 feet tall divided by five levels with 75 challenges, the place was a sight to behold, especially if you’re the adventurous type.  My daughter and I couldn’t wait to get started on our climb.  Once we each paid our $16.99 admission fee, we got on line to be rigged up in a special safety harness that would protect us throughout 100% of the climb.  At the top of each of our harnesses was a tether that moved through a continuous track above our heads no matter which direction we walked throughout the climb.  This tether insured that we could never fall off the climb regardless of how difficult and dangerous the challenges were.  This was a relief because some of the challenges were quite harrowing as you moved up through the higher levels. 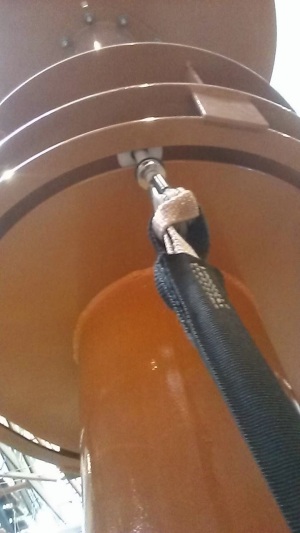 A close-up of our tether in the track.

The entire climb can be found in the middle of Palisades Mall, about an hour’s drive from Brooklyn.  The climb’s five levels spans both the upper and lower levels of the Mall.  Once you are harnessed by the climb’s employees, you enter the climb at the fourth level and you can choose via a series of staircases which level you want to start with first.  My daughter and I decided to start at the bottom level and work our way up.  It was a good decision since the rope challenges were easy there and got more difficult as you worked your way to the fifth level at the top where they were most difficult.  Upon walking across the first challenges, it takes some time to adjust since the fear of falling is constant at first.  Then, as you complete each challenge and as you gain more faith that the tether attached to your harness will protect you anywhere you go, you start getting more brave when attacking the next challenge. 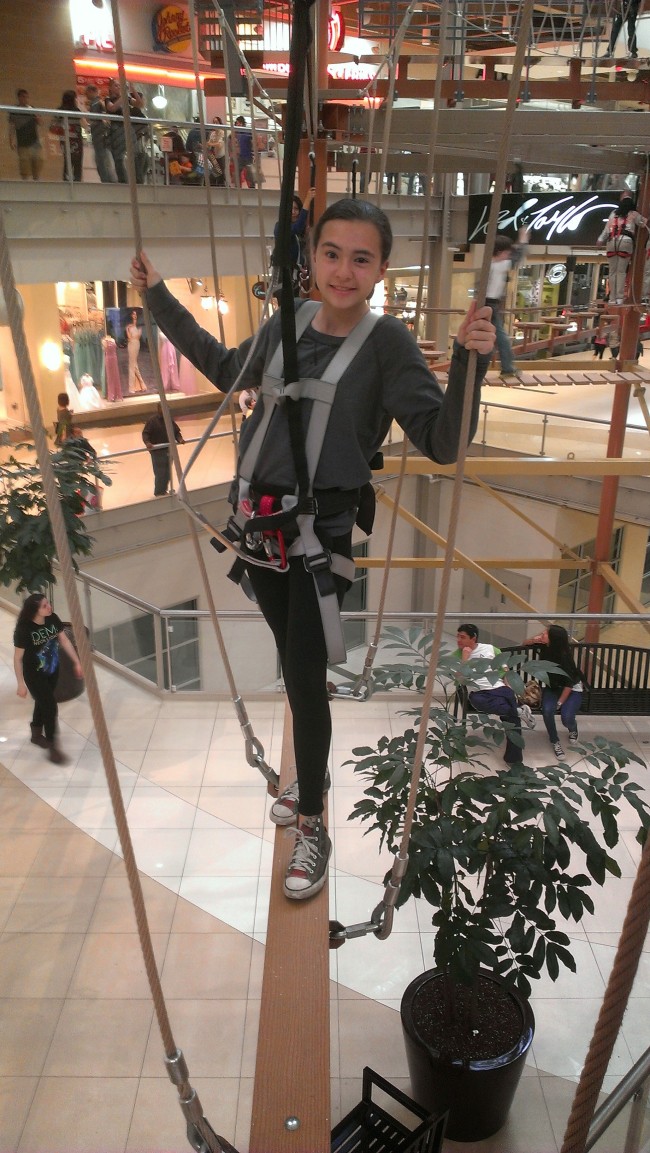 My daughter Emma at the first level of the climb. The levels got increasingly difficult as we went up towards the fifth and final level.

For those who love adventure racing, I highly recommend this place as a fun, but challenging way to improve one’s rope-climbing technique.  I found that walking across the balance beams and ropes challenges a great training ground for those who participate in such adventure races as the High Rock Challenge, an immensely-popular adventure race held every April in the Staten Island Greenbelt.  With each ropes challenge I completed, my approach to the next challenge became gutsier by seeing how fast I can get through the next challenge successfully without “falling off”.  Also, even though you are obviously in the middle of a huge man-made mall, looking at the faux wood-colored climb from a birds-eye view and using your imagination a little, one might feel as if they were high up in the canopy of a tropical rain forest, only that they were the monkey enjoying time in their “natural” playground.

For those who have younger children, there is a height requirement, but it doesn’t mean your child cannot participate.  For children who are 48″ and under, there’s a separate ropes climb course nearby called Sky Tykes.  Children between 42″-48″ can participate in the full-scale adventure climb, but they must be with an adult.  I’ve seen a father and his small son do this course together and they seemed to have a great time.

By the time we reached the fifth and final level and completed the final ropes challenge roughly 1-2 hours later, my daughter and I completed the climb with the satisfaction of knowing that we had just had a ton of fun while getting a great physical workout together.  I highly recommend this place to those parents who have a thirst for adventure who like to encourage it in their children.  Couch potatoes need not apply.