Several months ago, a New York Times reporter wanted to see where true baseball fan alliances were in the world of professional baseball.  So he turned to Facebook, a place that held a huge database of millions of America’s personal interests such as their favorite movies, music groups and for this reporter, their favorite professional baseball teams.  The article, called the United States of Baseball, focused on a color-coded map of the United States showing what America’s favorite baseball teams were according to zip code.  Regarding New York baseball teams, all of New York, Northern New Jersey and Northern Pennsylvania were  straight-out Yankees fans.  Surprisingly, there was not a single zip code that favored the New York Mets, not even in the neighborhood immediately surrounding Citifield, home stadium of the NY Mets.  For a Mets fan like me, these were very sad findings. 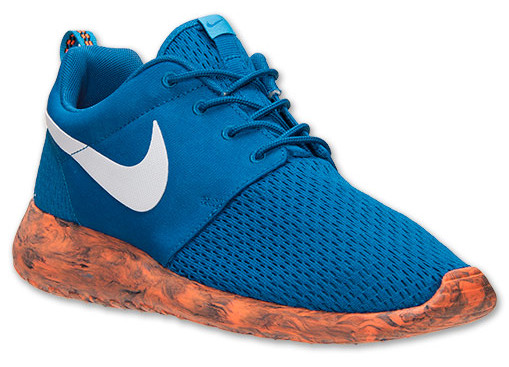 After reading the article, I began to naturally tune into the favorite baseball teams of the runners in my running club.  I wanted them to confirm for themselves whether they were Yankees or Mets devotees.  It was the beginning of baseball season after all, so the focus of our discussions during our long Sunday runs quickly turned to baseball.  There was one surprise though; most of the runners I spoke to seemed to favor the Mets.  I found this very odd because that United States of Baseball map in the NY Times article said something to the contrary.  I became very curious and soon launched my own investigation with the following theory: When given a choice between favoring the Yankees or the Mets, people who run will choose the Mets.  My theory was based on the differing histories of both teams that is essentially based on the concepts of winning and losing.  Whereas the Yankees have an illustrious history of being the winningest team in baseball, the Mets don’t.  Now if you consider the average runner as he is compared to all the other runners on a bell curve which includes the slowest and fastest runners in a race, he is most likely a middle-of-the-pack runner if not slower.  He or she is very unlikely to win anything at the end of a race except maybe a chance to break their own personal record.  This experience of continually “losing” races and trying to overcome a physical challenge naturally builds an underdog mentality in many runners.  The NY Mets have often been associated as the underdog team, so many runners can relate to them more than the Yankees.

Since many runners are middle-of-the-pack runners or slower, every new year represents a chance for them to do better and to break pr’s; in their point-of-view, to win.  This high level of personal optimism as runners gets transferred to a renewed optimism each year in a team that they can relate to with all their failed seasons that makes them feel that they are due for a long-awaited win.

Now that I had my Runners Love The Mets theory and my reasoning behind it, I needed to prove or disprove it.  I decided to create an online survey asking runners the following question, “If you are  runner, which team is your favorite New York professional baseball team?  They had to choose between the Mets or the Yankees.  To ensure that my survey pool would only be runners, I sent the link to the Facebook pages of several running clubs that I was familiar with, including the Staten Island Athletic Club, the Richmond Rockets, the Shore Road Striders, the Prospect Park Track Club and the New York Road Runners Club.  Of those who chose to participate, almost 41% chose the Mets while 59% chose the Yankees.  Even among runners, the Yankees still won.  However, the margin was only a 19% difference.

Considering these results, I decided that I needed a control group of non-runners to see if there really was a difference.  I created another survey for non-runners entitled, “Which team is your favorite New York professional baseball team?”.  For that survey, I specifically sent the survey link via email of friends that I knew for certain were not runners.  The results of the non-runners survey were dramatically different than that of the runners survey: 12% favored the Mets whereas almost 88% favored the Yankees.  This time, there was a 75% margin. 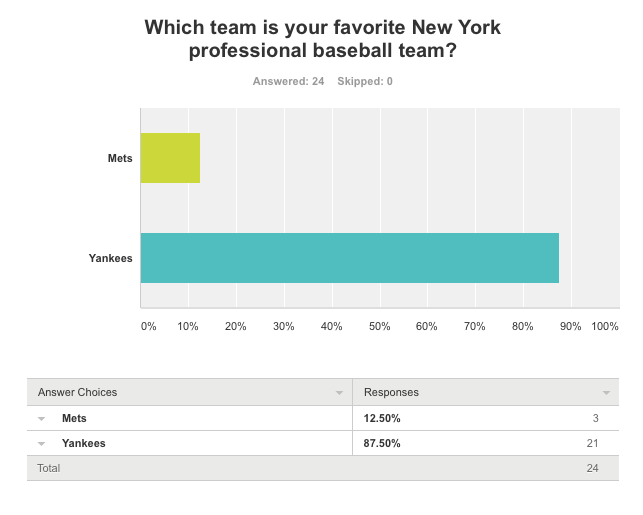 The results above help to confirm my theory that compared to rest of the populace of New York, runners in particular show an affinity to the New York Mets that exists due to the deep-rooted psychological concepts of failure and optimism that are reborn each year with each new season of Mets baseball and every new year with one’s running career.