This past Saturday, I ran a trail race in Northern New Jersey called the Muddy Marathon.  It was the most treacherous and physically-demanding race I had ever participated in.  It was more of an adventure or epic journey than a race.  There were many moments throughout where I felt like I was the character Frodo straight out of one of the Lord of the Rings films.

A group of about a dozen of my friends from the Staten Island Athletic Club started the race together at the base of a ski mountain.  Darren, our fearless leader, was responsible for banding us together for this epic journey.  Coming into this race, we knew that all the runners from the previous year’s race DNF’d or did not finish below the 10k finish time of two hours.  Darren and I and many of the others liked these odds and wanted to test ourselves by going through with this challenge.  We all knew we were in for something special during this race for the race description on their website stated, “This can barely be considered a trail race.  It is an adventure…. You will not be doing much ‘running’, but a lot of walking”.

As soon as Rick and Jennifer McNulty, the husband and wife team who direct these races started us off, we all barreled out of the starting line together.  Within a matter of seconds, our group had to make a sharp left and run straight up a steep mountain covered in man-made snow (the snow was leftover remnants from the ski season just several weeks before).  As each of us chugged up that mountain, we slowly but surely lost steam.  It got to a point where we all started walking.  The torture of going uphill for so long was apparent in all of us; within the first mile of the race, we began to experience a Death March.  But we knew that this was just the beginning for what was to come.

I ended up paired up with my buddy Mark.  We were both of of the “siXac Excellence” relay team composed of me, Mark, Danielle and Darren.  it was important to always be running with someone else in this type of race, for we needed each other for survival and to always make sure we were each okay after experiencing dangerous sections of the race.

We finally made it to the top, then ran around a lake.  We had to slog through muddy streams that were ice cold and at least one stream was knee deep.  My running shoes almost got sucked off my feet from the mud in there.

Throughout the race, we had to be alert for two things: the orange neon tape hanging from trees.  The tape marked the course; without following it, we would get lost.  The other thing and more serious of the two was the terrain.  The terrain was often unforgiving to our bodies.  It was full of uneven rocks, trees, branches and thorns everywhere.  I made the mistake of not covering my legs with any protective gear.  Both my legs received hundreds of small lacerations from all the thorn bushes and small tree branches that had cut and scratched them as I ran through all types of abrasive foliage.  As I was running through all this insanity, I pictured race director Rick McNulty drawing a straight line through the woods regardless of what was in the way.  I pictured him wearing a maniacal grin as he plotted this masochistic course for us runners knowing full well that this would be a killer course for us.

Finally after getting past the two-mile mark, we came across a part of the race where we had to descend back down the mountain on top of a two-foot layer of snow.  As we were running down, my leg fell through the snow and got totally submerged under a secret cave that the running water underneath the snow had melted through.  It was as if I fell into quicksand and could not get out.  I had to use all my strength to pull myself back out of that snow cave, then continue on my descent to the bottom of the mountain.  Once at the bottom, we had to mark our racing bib with a blue marker that was left hanging from a string to prove that we had run the whole distance.  At this point, we were roughly at the halfway point.  We had an energy drink, a food bar, then proceeded to “run” back up the mountain.  You can call this part Death March, Part II.

Eventually we got to a place we liked to call “The Escarpment”.  Here, we became mountain climbers and had to scale another steep slope full of huge uneven boulders.  Fortunately, Mark found an old ski pole and handed it to me.  That ski pole helped me scale those boulders without killing myself. 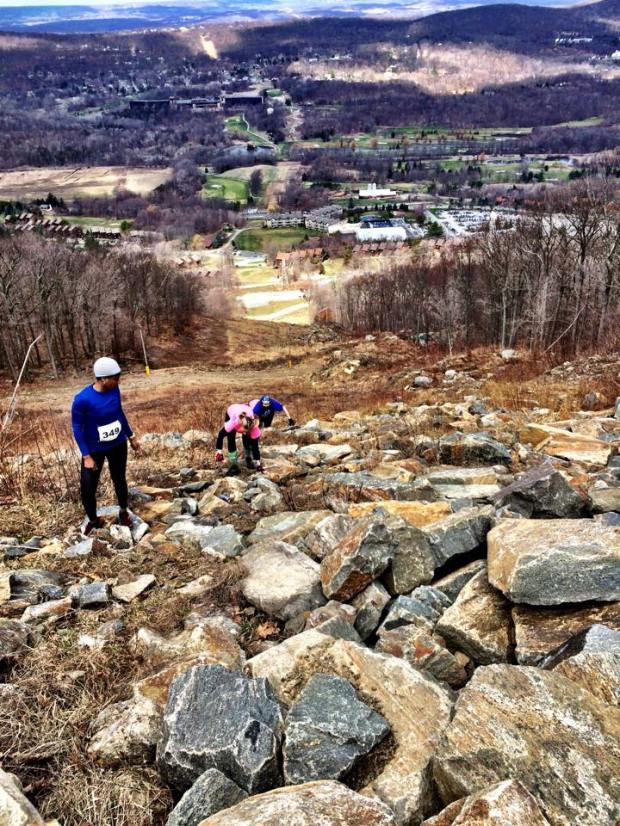 After what seemed like an eternity of endless boulders, we finally got out and into a huge clearing.  We were so exhausted, but we knew that it would only be a matter of time before we couldn’t run again.  So we both ran as much as we could until we entered the thick underbrush of the forest again.  Once back in the forest, our legs and bodies had to plow through thousands of tree limbs and thorny briers.  The blood and lacerations coming out of the lower parts of my legs could not be ignored.  However, we were now at the five-mile mark, so we were focused on finishing that last mile and crossing the finish line.

The last terrain change in our race was a downhill snow-covered section.  At this point, we both saw the finish line way at the bottom of the mountain.  We were so excited, we shot down that hill with reckless abandon not thinking about whether we’d fall or not.  We crossed the finish line finishing on top of snow as we had started this race.  Our finish time was 2:15, so we DNF’d.  We averaged about 20 minutes per mile.  I did not care at this point since I had so much fun just experiencing this amazing adventure. 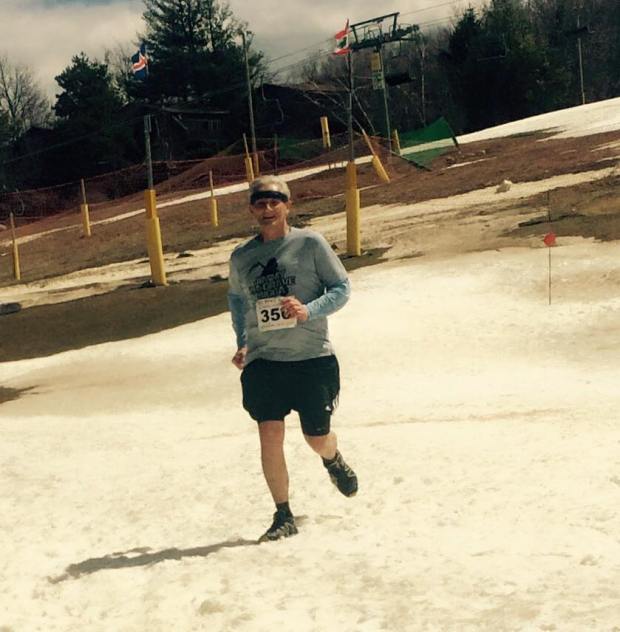 After crossing the finish line, the elation at having finished such a challenging and grueling endeavor was evident in all of our smiles as we posed for a post-race picture at the finish line.  The runners high was strong in each and every one of us at that moment.  And we were all thinking, “This course tried to conquer us, but we conquered it back”. 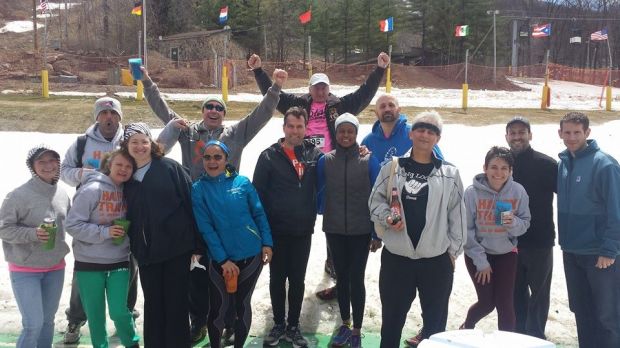