I work at an amazing school.  Many of the 240 special education preschoolers my fellow teachers, assistant teachers, and therapists work with start the school year with marked physical, social and cognitive delays.  By June, most show tremendous improvement in all these areas.  In a sense, we are miracle workers requiring vast patience, vision and faith in our children’s success throughout the school year.  Our social worker teaches families proper parenting techniques and our school nurse engages them in nutrition workshops.  The children need us and their parents depend on us.  Our school, The Guild for Exceptional Children, has been making miracles come true for thousands of children and their families for the past 35 years.  We have become their lifeline and a fixture of the neighborhood.  And we all treat each other like family; our school is a home away from home.

On October 24, 2014, the staff at our school were given notice by management that due to underpayment to our school by the State Education Department for the past six years that created a deficit of over a million dollars, our school will be forced to close it’s doors for good in 90 days.  Upon hearing this, we were all shocked and in total disbelief.  First, our jaws dropped, then as reality set in, tears began to flow down our cheeks as we thought about the children we teach, their families and losing our jobs.  To add to our despair, we knew that the economy was not good and that schools throughout New York were being closed due to budgetary cutbacks.  Our school was now going to be one of those sad statistics, so we thought.

The next day, after overcoming our initial grief, we all gathered up our strength and began to work on a game plan to help save our school, for we all agreed that we weren’t going to go down without a fight.  This was our children, our school, and our livelihood at stake.  We began to discuss what we had to do first.  We knew we had to contact the media to share our story with the rest of New York.  Adrian, our music therapist, made a list of all the local politicians, newspapers, TV news media outlets we had to contact.  James contacted the politicians since he has connections with them while I contacted the news media.  Eddie, our front desk receptionist and voice of our school, gave a motivational speech to our staff to raise our spirits and to tell us all not give up without a fight.  We knew we needed to mail out letters to politicians to get the ball rolling, so all staff donated money to pay for the postage.  Jose, our speech therapist, used his experience with technology to create an online petition to help save our school from closure.

The following day, Stephanie, our school social worker, had an emergency meeting with all the parents to discuss the school closure.  After telling them the bad news, the parents turned into an angry mob and blamed her for the closure, which was unfortunate since it was not her fault at all.  I give her credit for having to deal with this situation.  However, we all knew that the parents were our secret weapon in fighting for our school.  Over the next few weeks, Stephanie had more meetings with them to discuss various game plans we were going to hatch to help save our school.

Norma, a teacher who is also a parent of a child in our school, contacted a Spanish-speaking news network.  They were the first reporters to tell our story.  Over the next few weeks, more reporters came to our school to report what was happening, then local Bay Ridge newspapers got in on the action.  The news was spreading!

During this process, Alice, our school director had her hands tied knowing there was only so much she could do to help.  She encouraged us to continue to fight the fight.  As no sign of progress or good news came to the employees at our school over the next several weeks, she would often encourage us all to have hope and faith for a good outcome to all of this.

Letters to local politicians were mass-mailed from our school.  Parents were given letter template handouts to use and were encouraged to add their own personal story to these letters before they mailed them out.  I realized that many of them may not want to retype these letters in their computers, so I recreated one of these templates on the internet using Google Drive.  Every day, I worked one-on-one with any available parents to help them add their own personal success story involving their child and our school.  Five copies were mailed out from each parent I worked with, one to Assemblymen Marty Golden, Vincent Gentile, Felix Ortiz, Mayor Bill Diblasio and Governor Cuomo.  One of my parents even took it upon herself to contact Bill Gates of the Gates Foundation and asked him for financial help to help save our school.

The reason why our school was going to close was this:  It was found out that our school for some unknown reason was being underpaid by the State Education Department (SED) for several years.  Other schools were being paid $32,000 per student whereas our school was being paid only $27,000 per student.  This underpayment was slowly-but-surely adding to an increasing deficit in our school’s budget amounting to over a million dollars.  Carolyn, a well-seasoned teacher in my school, got hold of a list of all the accountants who work for the SED whose jobs it is to pay the schools and to set pay rates.  I, along with Eddie, wrote a well-crafted letter telling them that their discrepancy is forcing my school to close and to give reason for this discrepancy.  I went as far as saying that maybe they made a clerical error along the line and to please look into it.  I sent this letter as an email to all the accountants.  The very next day, one responded telling me that they will look into it.  Carolyn worked with her students to create a very emotional letter with their artwork and photos asking them to “Please don’t close my school!”.  She mailed these letters to the very same accountants that I had emailed previously.

Stephanie then had a special meeting with the parents to discuss holding a rally with the parents at one of the SED offices in downtown Brooklyn.  James, our school art therapist handed out art supplies to all teachers and encouraged them to create rally posters that the parents would carry as they marched.  Many of the posters displayed the words, “Save Our School!” which was probably the most effective rally cry we could use.  Stephanie applied for a rally permit and several news outlets were contacted to report on the rally.  With Adrian and Carolyn helping to lead the rally that day, the rally went on without a hitch.  Many parents came and the parents marched and chanted, “Save Our Schools!” while carrying the rally signs made by the students.  This became a very powerful news feature that night on the evening news.

Meanwhile, our Executive Director Paul Cassone continued to contact the local politicians asking for help and he finally got in contact with the SED.

Last week, we all got the news we were waiting for: our school will be saved and will remain open until at least the end of the school year.  On Tuesday, December 23, two days before Christmas, we received the following news:

“…the Division of Budget in the State Education Department has approved the budget proposal presented by the Department of Education for our Preschool.  THIS MEANS THAT OUR SCHOOL WILL HAVE THE FUNDING NEEDED TO CONTINUE FOR MANY YEARS TO COME!  This has happened due to all of your efforts!  This will indeed be a joyful Christmas for all of us and for our children and parents.”

It is said that amazing things that happen around Christmas time are called Christmas miracles.  For my coworkers, students, parents and our families, this news really became a Christmas miracle.  And this would never have happened if we didn’t work together as a team all dedicated to save our school. 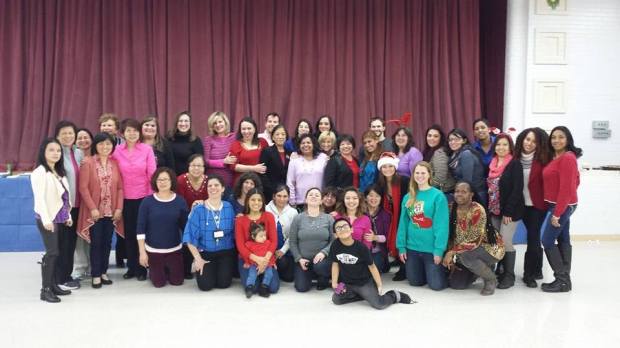 Here’s half of the 90 coworkers that help make our school a truly special school.