The worst thing that happened to me in 2018 was that I was fired from two part-time jobs.  One was as a running coach for the New York Road Runners Club, the other was as a deliveryperson for the app-based delivery service called Postmates.  After working only two days for the NYRR, I’m still not sure why I was fired.  An explanation for why Postmates fired me can be explained here.  These were the only two negatives in what ended up being a very productive year for me.  And what especially made the year stand out for me was  that I spent more time helping others besides myself.

In February, I met with William Colton, the local Assemblyperson who represents my neighborhood.  We were discussing ways we can improve our neighborhood.  At the end of our meeting, he handed me nomination forms for the “Women of Distinction Award”.  He asked me if I knew any women who deserved recognition for their efforts to improve their community, I should nominate them using the forms.  This award “honors women whose outstanding contributions help make our community stronger”.  I nominated two friends I know who have worked tirelessly to support disabled runners.  As a result of my nomination, Nicoletta Narangis and Jacky Lee were both recognized at a formal ceremony.  Both received framed certificates and each gave speeches at the ceremony.  Afterwards, I had lunch with everyone including Mr. Colton and the mother of slain police officer WenJian Liu .

Nicoletta giving her speech upon receipt of her award.

Jacky posing with her award. 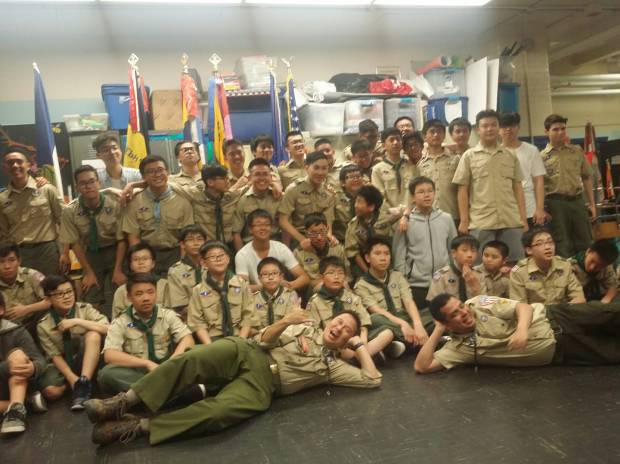 Emma had turned 18-years-old in May.  Since she officially became a woman, I wanted to film a music video that celebrated this fact while showing the conflicting feelings that I  had as her father.  We filmed scenes to the video in about a dozen different locations throughout Brooklyn and Manhattan.  You can view the video here

Scene from the music video, The Edge of Eighteen.

A friend of my cousin David had told him that he needed to hire a bunch of seat-fillers for a live music show that his son was going to produce in Queens.  Knowing that I was once a seat-filler years ago at an Andre Rieu concert, my cousin referred him to me thinking that I could help him in some way.  I told him that I can probably get a bunch of my actor friends to fill seats for his show if he paid them.  He liked the idea.  I then proceeded to find a bunch of friends who were a combination of actors, runners, and co-workers.  I found about 18 people in all.  They were each paid $40 to fill seats at a 2-hour show.  One of the singers in the show was really good and was in fact an American Idol finalist.  I was pleasantly surprised to see that my efforts in getting this venture together were a smashing success.

My friends and I posing together after seeing the show.

In August, I filmed a horror short called The Lovely Woods.  I submitted it into the 2018 Single-Take Film Challenge.  Out of 30+ submissions, my short was chosen as a semi-finalist.

The crew of friends who helped me make this film short a reality.

I originally had the ending credits of the film  displayed with no music.  Previously, my daughter introduced me to the music of Harley Poe.  One of his songs really excited me and I knew that the song would pair well with the ending credits.  But I needed Harley Poe’s permission to use the song.  I emailed him and within a matter of days, he responded and gave me permission to use it.   It was very rare to get this kind of permission, especially for someone like me who is an unknown filmmaker.  You can view the film short complete with Harley Poe’s song here.  I’d like to thank the following for helping me make this film happen: Anthony, Giovanni, Yolande, Emma, Andriana, Jacky, Michael, and Anthony Martinez.

In August, my family and I went on a 1,200-mile journey through Canada.  We visited the Canadian side of Niagara Falls, Toronto, the Thousand Islands, Montreal, Lake George, and Albany.  I’d like to thank my running friend Sarah Gariepy.  She is a fellow pacer for the NYRR who lives in Montreal.  She had brought me and my family on a nice tour when we visited that city.

Hunter and Emma on the Canadian side with the Horseshoe Falls behind them.

Will Sanchez is a running friend of mine who retired early due to making good decisions about his career.  He’s a life-long runner who embraces everything about the local running community in New York City.  He is a very soft-spoken and thoughtful guy who has created a running-themed TV series for public access television called Gotta Run With Will.  Two years ago I was interviewed for one of his shows.  Since then, I have been actively involved in finding new “talent” for Will to interview.  If I think the person has a great story, I will refer him/her to Will for a future show.  This year, I am proud to have recommended two runners.  One was John Pierre.  Many years ago, John was assaulted by a gang of thugs.  He was beaten so badly that he was left for dead.  Suffering from the damaging and painful effects of traumatic brain injury, John overcame his pain by resorting to running as his therapy.  Many marathons and half marathons later, John has become a kind of super-hero who is now known as The Ultimate Running Machine.  Realizing that he survived his ordeal, he wants to show people the power of overcoming hardships through his continued participation in race events.  He now runs every race donning a custom-made cape to add to his super-hero persona.  You can view his interview here. 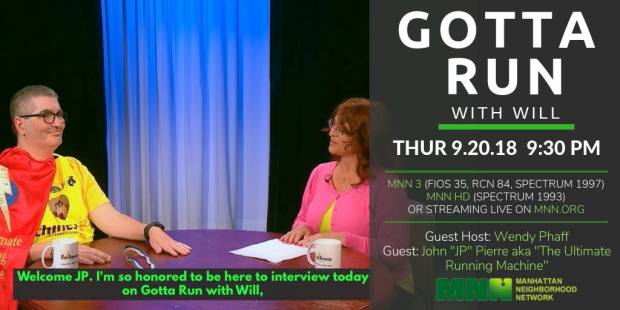 Another runner I recommended was Wayne Pacconi.  I met Wayne while a pacer at New York Road Runners Club race events.  As I got to know Wayne’s interesting life through social media, I noticed that he had a very lighthearted approach to running.  Many of Wills episodes are about more serious topics.  Wayne was a breath of fresh air and his episode was rather entertaining.  Wayne is a race director who puts on various trail race events in New Jersey.  And he owns chickens too!  You can view his episode here.

In October, I had the opportunity to support two friends who were running for office in their respective communities.  Andrew Gounardes ran against Marty Golden for the 22nd Senatorial District of Brooklyn.  Golden was the incumbent who served his district for over 16 years.  Gounardes was a relative newcomer who had to campaign hard to win the district.  The two candidates battled it out.  In the end, Gounardes won the seat by about 1,000 votes.  During his campaign, I ran with an “Andrew Gounardes for New York State Senate” campaign poster attached to my pacer stick.  I managed to run a total of 20 miles this way over a three-day period and exposed his message to potentially thousands of people during my runs.  I am very excited to see how Andrew will do his job.  He has a lot of great ideas on how to improve his district and has the energy to see them through. 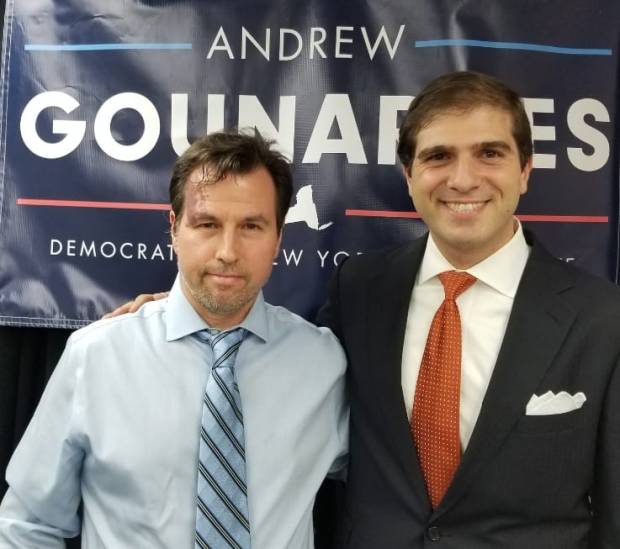 On the Staten Island side, I actively supported my friend Michael DeVito for Congress.  Michael also campaigned hard, but in the end, Max Rose was the Democrat who won with more votes.  Michael is a very upstanding human being who radiates heaping doses of positivity whereever he goes.  I had the pleasure of having pizza with him and his wife Natalie while they were campaigning in Staten Island.  Through my desire to help Michael, I got to know both of them better.  I also brought (aka dragged) my son Hunter with me so he can learn more about the political process.

In the acting world, I got hired to be a badminton advisor for a series based on the life of Emily Dickinson.  This was one of the most surprising “acting” gigs I was ever hired for.  You can read why here.

Also, in one of the several acting gigs I worked on in 2018, I portrayed a small-town sheriff for the show Instinct.

Me patiently waiting for my required donut break.

My sister Sarah had gotten married in September to a great guy named Piotr.  I was in tears when she walked the aisle because I took care of her since she was a baby.  Now she’s a married woman.  I wish them the best of luck.

My dad walking his daughter down the aisle.

Life works in funny ways.  Right after I got fired from my coaching gig with the New York Road Runners Club after working for them for only two days, I soon got hired to be a professional pacer for the Mile High Running Club.  My job was to pace and lead a group of runners that were training for the NYC Marathon.  This gig lasted for several weeks up until the actual Marathon.  I did a well enough job that they will be hiring me again this January to pace runners for the 2019 NYC Half Marathon in March.

In December, I orchestrated a trail run in the Staten Island Greenbelt.  My efforts involved 22 runners from three different running clubs.  Most of the runners came from Brooklyn and had never run in the trails before.  Everyone enjoyed the 5.5-mile run.  I even connected a group of injured runners and had them walk with a very pregnant runner through the woods.

Finally, I spent many long Sundays at a cafe througout 2018 writing a book.  I finished it as a 75-page novella and I am now in the proofreading stages.  Writing something significant was on my bucket list for the past 30 years and I finally achieved it.