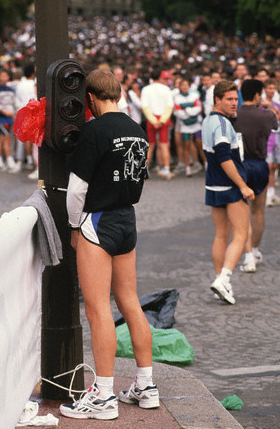 During my Sunday long runs with the Staten Island Athletic Club, our masters captain Gus noticed I finished each run with a noticeable layer of thick salt across my forehead.  “Josh, you gotta hydrate more before, during and after your long runs”, was his response.  Keeping this in mind, I made sure I took his advice when I ran The 2013 Brooklyn Half Marathon.  The day before, I loaded up on several glassfuls of water.  The morning of the race, I had a big cup of coffee, then a few more cupfuls of H20.  I think I was hydrated enough and ready for the race.

We were in our start corrals and just moments away from the start of the race.  I was looking for an available port-o-potty, but they were all occupied.  I decide to hold it in; how bad can that be?

I was bent on breaking my pr (personal record) of 1:41:13 for this race.  I’ve run many times with my friend Jennifer, a dedicated runner who has been continually improving in her running since I first met her several years ago.  Jen and I planned on starting and finishing together.

The race starts.  After running with Jen for the first seven miles and filling up on even more water at each water station throughout the race, the urge to urinate is growing in me.  Jen tells me to go ahead of her since my pace was picking up, so I start pulling away from her.  I am now on Ocean Parkway, a flat, wide thoroughfare going through the heart of Brooklyn.  As the miles pass and my speed increases, the need to urinate increases.  At Mile 10, it becomes unbearable.  I decide that the only way I can finish the rest of the race comfortably is to get rid of all the urine.  But stopping to pee was out of the question; I wanted to save as much time as possible in this race so I can give myself a chance to break my pr, for even seconds count.  My bladder was in pain holding back the floodwaters, so I decided to urinate in my running shorts.  The only problem was that I couldn’t do it.  I was conditioned since childhood not to pee in my pants.  I had to mentally motivate myself to pee.  Like a pathetic cheerleader awkwardly chanting things like, “Josh, you can do it!”, and “Pee! Pee! Pee!”, I was determined to achieve success in this matter.  After much self-motivation, the floodgates opened up and a giant sense of relief filled my being.  “Hallelujah! Now I can focus on finishing this race!”, I thought to myself.  And thank the Lord that I was wearing black running shorts.  I looked at other runners to see if they noticed my ‘situation’, but they were all in their own little  world focused on getting their race done.

After relieving myself, I was able to focus on increasing my pace, for I was bent on breaking my pr.  The last few miles were my fastest, especially Mile 12.  I crossed the finish line on the Coney Island Boardwalk with a new pr of 1:40:08; over a minute faster than my previous half marathon record.

Boy, this race was a real pisser!

As I get older and more daring in life, things that I once thought were crazy are crazy no more.  One of these things was being a participant in the 2012 Coney Island Polar Bear Plunge, held on the first day of every new year.  Last year I participated in my first plunge and had a great experience, but I did it alone that day.  This time I invited members of my running club.  There were nine of us who were willing to anoint our bodies into the icy-cold goodness of the Atlantic Ocean.  As insane  and traumatic as this may sound, it is important to describe what one goes through during the entire process of entering the water and becoming a Polar Bear.

At exactly 1:00PM, the “race” into the ocean officially begins.  With equal amounts of fear, trepidation and excitement, I, along with hundreds of other people throughout the New York area begin a mad dash straight towards the ocean.  In the midst of this frantic run, there are hundreds of spectators, cameramen and photographers taking pictures of everyone.  Finally, I make it into the ocean.  My feet feel the cold first, feeling like a jolt of icy-cold energy about to begin its rapid ascent through my entire body.  For some reason, a huge smile forms on my face and this is happening to everyone else around me.  Instead of becoming fearful, everyone begins to become giddy from the freezing sensation we are all experiencing.  The icy-cold sensation becomes a drug, and we want more of it.

The absolute, overwhelming and encompassing feeling of coldness around every part of my body awakens my brain and makes me think about the meaning of life at a level that I’ve never felt before.  It is at this moment that I have an epiphany about life itself.  I am on top of the World.

On a physical level, consider drinking a strong cup of Starbucks coffee; now multiply that ten-fold and that is how awake you feel when submerged in 40-degree water.

After going through the above experience and my epiphany the whole of two minutes, I make sure that I totally submerge myself, head and all, underwater, for this is the only way one can be a true Polar Bear.  After doing this deed, both of my feet feel numb, so I SLOWLY start heading back towards the shore.  If anything, the one difficult part of the whole Polar Bear experience is the freezing of the feet.  Since your feet are extremities and have a lot of capillaries, the coldness one feels there can be quite discomforting.  According to the Polar Bear Club Rules, you have to enter, get completely submerged, then immediately leave the water.  This rule was no problem for me to follow.

After making it out of the water alive and well, I find my friends and we joyfully high-five one another.  We each get certificates stating that we “Did it!”, thereby making our admittance into the Polar Bear Club official.

I am now a certified Polar Bear!

P.S.  According to the Polar Bear Club website, no one has ever died from doing a plunge. 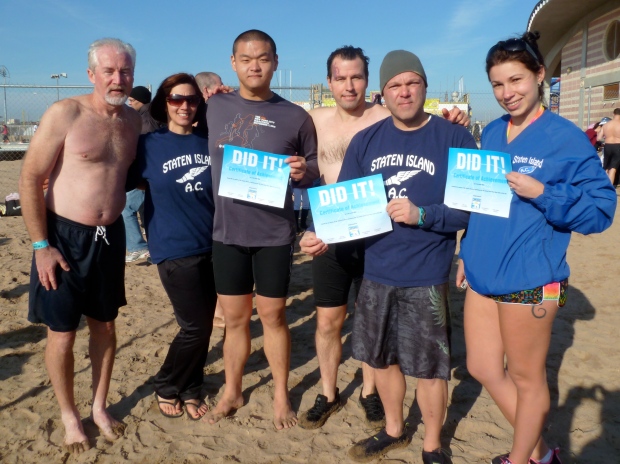 From left: Mark, Courtney, Steve, Me, Darin and Katie.