The last time I wrote a blog about my marathon experience was when I ran the 2009 NYC Marathon.  That marathon was the most perfect marathon I had ever run.  My goal of breaking four hours was smashed with a 3:56:58 finishing time and a 13-second negative split thrown in for good measure.  After that memorable experience, I really had no further motivation for ever writing about another marathon again.

The story I’m about to tell is about a marathon I failed at.   However, what happened after I crossed the finish line was what made this marathon my most memorable.  It was the morning of November 2, 2014 and I was one of three dozen runners chosen by the New York Road Runners Club to be an official 4:30 pacer.  It was only a matter of minutes before the cannon would go off to start our wave of runners.  I patiently waited in the corral with my pacer stick in hand and introduced myself to the other runners.  I engaged in some small talk, joked with them and promised to do everything in my power to bring them across the finish line in under four hours and thirty minutes or else, I joked, I’d “Get fired”.  As I was talking, I noticed an attractive German female runner with a demure smile staring straight at me.  Out of the three pacers available for the 4:30 pace, it seemed like she was rather content with staying with me.  It was a cold and windy day, one of the coldest on record, and I was shivering in the cold wearing nothing but shorts and a short-sleeved shirt.  Noticing my poorly-chosen attire for this kind of weather and my chattering teeth, the female runner approached me and began to rub all the cold parts of my body with her hands to warm them up.  “I think I’m gonna like this race”, I thought to myself moments before our wave barreled out from the starting line.

The race started and we began running across the Verrazano Bridge, my German friend was right beside me on one side and Dave, my co-pacer, was on the other side.  With each mile we approached, I would check the pacer strip that was wrapped around my wrist to my stopwatch, then shout out to my running disciples what our mile split was in relation to our pace goal.  When we were one minute ahead, I would shout, “One minute in the bank!”.  For the next 22 miles, I would repeat this procedure so all my runners would know how close to our pace goal we actually were.  Since there were a lot of runners all around us, at times I would have to shift my body around the slower runners that we passed.  No matter which way I shifted, that German runner was always close by my side with her pretty little smile, almost as if she were my shadow.  At around Mile 5 in Sunset Park, I finally asked her what her name was and she told me it was Sohan.  She said it came from Sanskrit and meant “beautiful”.  I thought that this was the perfect name for her.  We were running at a conversational pace and she told me early on in the race how she came all this way from Germany to New York City with the goal of breaking 4:30 and her current personal record for the marathon distance was 4:34.  I began to trust her by handing her my pacing stick during the race when I had to pull off momentarily to go to the bathroom or to hug my daughter Emma who was handing out water with her track team at Mile 4.  After 12 miles of small talk and joking around, we were already running through Greenpoint, Brooklyn.  I told her that my goal was no longer just to break 4:30, but to help HER break 4:30 as long as she helped me break 4:30 as well.  We were then committed to each other from that point on and this whole endeavor started to become personal. 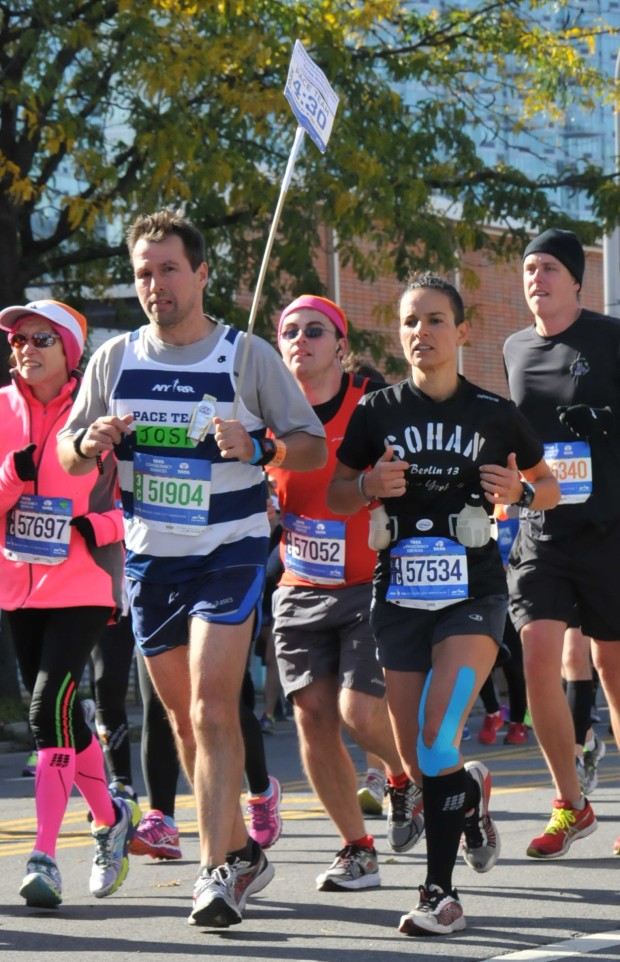 Me, Sohan and the rest of my running disciples running along the Marathon route somewhere in Brooklyn.

At Mile 18, we were running along First Avenue in Manhattan.  Both my legs tightened up like rocks, but I stayed focused and tried to ignore the burning sensation that started to flare up in both my legs.  Dave, the other 4:30 pacer who I started out with finally crossed my path at this point.  I told him I was having trouble and he offered to hold my pacing stick for the remainder of the race.  My stubbornness and resolution to do my job kept me from giving it up to him.  I was a pace leader after all and I had to represent the pace goal printed on the flag I carried throughout the entire length of the marathon.  Runners were counting on me.  Up until now, I was still able to save up a minute or so “in the bank” that would be needed later on in the marathon as the miles wore on.

Four miles later, we approached Marcus Garvey Park in Harlem.  As Sohan and I and the other runners made a sharp right turn at the beginning of the park, then a sharp left, we continued up the block and passed the Mile 22 mark.  All of a sudden, an excruciatingly sharp pain pierced my right calf muscle and instantly froze my body into a statue.  It was a cramp!  A loud painful screech emanated from my mouth and Sohan instantly turned around wondering what had happened.  She reached out her hand to me with hopes of helping me get back on track, but I was in so much pain.  I stayed transfixed on that spot and shouted back to her, “Go!  Go finish this thing without me!  And finish strong!!!”.  She then shouted back to me, “I WILL wait for you at the finish line Josh!  Don’t worry!”  I remained there motionless for what seemed like an eternity as hundreds of runners passed me by.  Out of frustration of not being able to move due to the extreme pain, I made a fist with my right hand and began punching my calf muscle hoping to dissipate the acute buildup of lactic acid that caused the cramps.  After punching it several times, the pain subsided and I began to run again, only I wasn’t the same.  The cramps flared up over and over again and at random for the remainder of the race.  The next four miles to the finish line became a horror movie for me and the cramps altered my entire existence to the point where I became a zombie.  However, I ran through this newly-formed pain sensation for the next four miles deluding myself thinking that I can still represent myself as a 4:30 pacer.  Only I became a pathetic excuse for a pacer and ran aimlessly, coldly and painfully up 5th Avenue.  My running club friends Mark, Corey and Stephanie saw me at 92nd Street and 5th Avenue (the 23-Mile mark) and they later told me that I had this cold listless stare as if I were looking right through them.  For the rest of the race, I lowered my pacer stick to show everyone that I had to abort my mission as a pacer knowing that I would unsuccessfully finish this epic journey well above my 4:30 pace goal.

I eventually made it to Mile 25 with only a mile to go to the finish line.  Hundreds of spectators were cheering me on along the Central Park South straightaway as my leg cramped up, my body froze, then punched my calf muscle a few times, and prodded myself into another physical torment to make myself run again.

I crossed the finish line not with a sense of accomplishment, but with a sense of failure.  The 2014 NYC Marathon started out as textbook race for me, but ended with disappointment.  However, after I crossed that finish line, many runners who had run with me early on in the race thanked me over and over again for helping them reach newfound personal goals.  I thought of Sohan, my German “running girlfriend” as I playfully called her at the beginning of the race and wondered what had happened to her after she had left me at Mile 22.  After the finisher’s medal was placed around my neck, my next goal was to look for her.  When we were running through Greenpoint, Brooklyn together, we both agreed to finish together at the finish line and since we split up before the race was done, I desperately looked for her among the thousands of runners that were now slogging by me during the post-race “death march”.  I was cold and tired and eventually  gave up in my search.  My final finish time was 4:40:05.  Not bad considering that I had tortured myself into finishing this race by any means necessary.  Early the next morning, the Staten Island Advance, a local Staten Island newspaper, published a small article on my pacing experience, which could be found here.

The next evening after leaving from my running club meeting, I received the following email from the New York Road Runner’s Club: 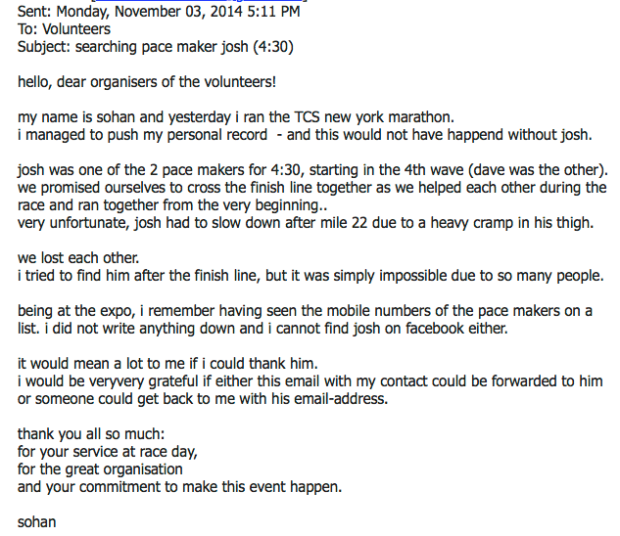 Reading this, I could not believe that she had found me!  This confirmed all along that she did in fact look for me after crossing the finish line.  I immediately emailed her back letting her know that I had received her message.  The next morning, she responded with the following email:

She finished in 4:29:28?!!!  This second email redeemed my whole marathon experience with what I originally perceived as my failure to achieve my pace goal.  Up until Mile 22, I had succeeded in bringing her on a path to the correct pace goal.  After I blew my tire at that point, she had continued with that pace towards the finish line and achieved a new personal record while breaking 4:30.  I was ecstatic!

It was already a Tuesday by now and only two days after we had both ran the Race of a Lifetime.  I was still absolutely exhausted from the event, but I had to remind myself of my carpe diem philosophy, which is to live every day as if it were my last.  Considering this, I asked her if she’d like to meet me that night and have a celebratory beer together.  She enthusiastically obliged.  We met at a bar in Brooklyn and had a grand old time talking about our marathon experience and joking about our post-race aches and pains that made us both walk in a comically pathetic way.

That night, she asked me if I can be her tour guide to see places in New York City that are less well-known than the usual tourist spots.  I told her I’d bring her to Staten Island to show her places many tourists never get to see.  One of the places I brought her and her friend Thomas to was the Staten Island Greenbelt.  They were both amazed to see such a beautiful natural environment so close to an urban setting.

I have now run the NYC Marathon five times.  While they all were great running adventures, the 2014 NYC Marathon will always be my most memorable.  50,000 people ran the marathon that day.  And one of them became my friend. 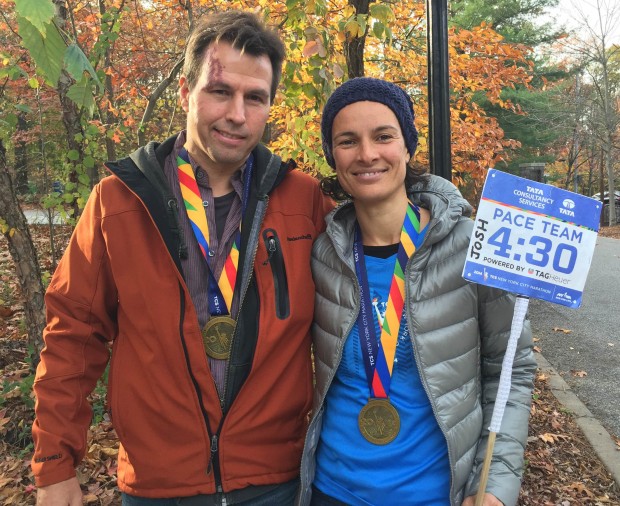 Sohan and I posing at the entrance to the Greenbelt Nature Center in Staten Island several days after completing the NYC Marathon. We hiked the 1-mile family trail, but we did not walk pathetically that day.

2 thoughts on “A Glorious Failure”